The Links below take you to the Bethlam Museum.A collection of Richard Dadds artwork can be found there.They do have exhibitions open to the public.It is well worth a visit.There are no upcoming showings of dadds work on the calender at the moment..He does have about 28 paintings visible online.His masterpeice, is not there , of , course, but can be found in one of the national galleries.Prints can be purchased,or downloaded.This museum is located in Monks Orchard Road , Beckenham.I think it is in the grounds of the Bethlam Hospital.

This is a total connection to the message.I am including two fabulous books by an ex-prisonner who made the big time after release, although they did shut him up eventually.he died aged 50.
John Frank Norman, a Barnodos boy he served three years in Camp Hill,Isle of Wight and wrote a good few books before passing away in 1980.
I will recommend and link two of them on Amazon, albeit secondhand, because they are out of print.

Cheaper copies are available at https://abebooks.com

Dadd had an unusual experience in the desert wth Nomads which was probably life changing and mind changing.A totaly different culural expeirience and knowedge.On his return he was probably somewhat culture shocked.I would call it a temporary madness due to being deconditioned from the normal values.Additionally this enmity of father/parents etc is not unusual.It does not neccessarilly point towards a criminal insanity such as dangerous schizophrenia.The 49 years detention incarceration was by no means justified.In fact he was probably of a criminal frame of mind rather than an insane condition.He was also intelligent,respected ,talented artist of his day.
His painting does demonstrate he knew what as happening.It does deliver the meaning of this detainment by the system.It shows he was sighted.That he could see.In terms of psychiatry, he was probably sane at the time of painting this picture.It took aproximately 10 years to accomplish from the time of his admission.So he started on it almost straight away.

In this sort of imprisonment, one can think of nothing else but escaping from , by hook or by crook.It is on you mind 24 hours hours a day, even while you sleep,indefinately.In Dadds case 49 years.
You take the oportunity to utilize any advantakge or means possible that you encouner on a day to day basis.
It would definately been one of the several reasons behind Dadds work, to gain a release from incarceration by a demonstration that he was of sound mind.Other reasons for the work would have been to obtain funds for the same reason.
Also to make a statement to the world to suggest he was not neccassarilly guilty, but was justified to some extent.Also to reflect the workings of the "Machine" at this time.A message in a bottle to the world beyond the locks and doors of an Asylum.
His plea was rejected as we know, and he was unjustly imprisonned for a further 39 years.
In all likelyhood his disgraced familly would not want him to be returned home.
It was not only an asylum he was dealing with.The penal system has always recognized the central role of "The Big House" in prison/government politics.
I would guess that he was very likey a political prisoner, in detention.

These politics are still similar today in England,and always have been.
Hamishmac. 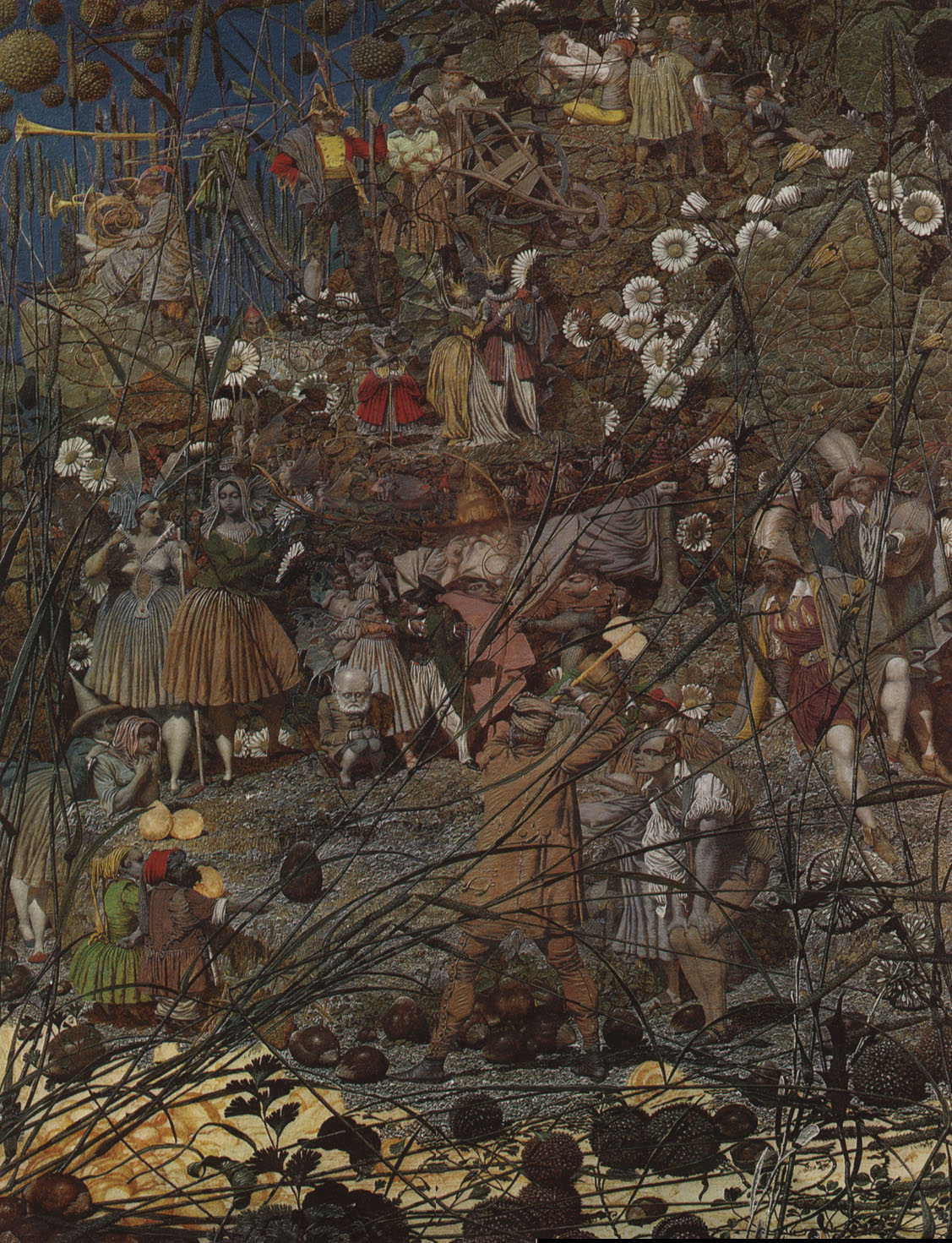 This painting is a self portrait.
I have spent time in the Bethlam and Broadmoor myself,17 years before the modernization of these places, where the flavour of the history, ghosts and memories of the past linger in the corridors and stories are past on by word of mouth.Where no outsider ever gets to see these incarcerated souls, who are not going to see the outside world again.This was the case for Richard Dadd.Born in 1817 and died in 1886 at 69 years,due to chronic lung desease.Dadd went a bit mad it seems after he come back from Egypt where he had spent time under the starlit desert night skies,out in the open with a tribe of Nomads,with whom he had blown his mindsmoking cannabis.
He ended up killing his dad when he returned and sent to the Bethlam.He had been a good artist and won a scholarship to the Royal Academy of Arts at the age of 20.He was 26 by this time(1843),and stayed at the Bethlam until he was 46.He produced his masterpiece between 1855-1864.so it was finished off within 1 or 2 years after being transferred to Broadmoor.He had no painting materials, brushes, paints etc.it was created out of strands of his own hair, and left over beetroot and suchlike coloured dyes from food stuffs, tea etc,that he manufactured himself.
Having been in a similar predicament, I can predict what was foremost concerning Richard Dadd in this situation.firstly, 24 hours a day would be on his mind that he would have to overcome this imprisonment.Additionally means to doing so would have been considered by hook or crook.Also money, or lack of it would have been a majort factor.
He was also an Aertist and the inreligent man in this position would not ignore the neccessatiy of writing a book that was not normally possible to write.In this case paint a picture to put the experience onto paper.Very much a message in a bottle.So he concieved this masterpeice.It is very good.But,dont be fooled, on his mind as a major factor was the selling and making money out of this work.Had he been suceesful in getting his painting recognized at the time, he would have facilitated his freedom and financial security.

It is quite likely,like other artists, that Richard Dadd carried a hidden love affair through his life.Very likely it was a factor behind his mental diagnosis and behind his behaviour and index offencee. Also a heavy influence in his artwork. It may have been an exotic deva from North Africa or a village sweetheart from his own village, but the whole story behind him suggests that this is very likely.One must remember that in those days it was inproper to talk on such subjects, outside convention.

Richard Dadd killed his father knowing that the outcome would have been to be hanged,yet he still went ahead ith the killing.In those days this was the situation. He was so convinced of his beibg right and was also challenging the law to the point of death. He was a victim of circumstance.Her was not a criminal minded person, and this was not a killing for profit.Political wrangling implemented the relatively new mental health law, and by this ,he was spared the death penlty.A not to be expected outcome.It is most probable that he never truly changed his conviction that he was jstified for this killing, at least in his own mindThese politics are very relavant to his eventualy artistic deliveries.

Whether or not there is any truth to the tale that Richard Dadd now runs about the Berkshire hillsides reincarnated as a bunny rabbit, I do not know.But I do have a feeling that there may be truth that this was the damned souls fate.

Richard Dadd was affected by his stay in North Africa. Living with the Nomads in this tropical utopia, he spent nights out under th firmanant, under the tropical stars with a native peoles, entirely natural and unspoilt. Woman folk andbeauty of an unparralled proportion, smoking hashish in utopian paradise. He was srtuck. A bit like the mutineers of The HMS Bounty.His conciousness became boundless and he metamorphosed his English identity, under the cosmic expansion.He probably didnt fully understand what was happenning to him.
The pint is he returned. To the drab mundane village in England to be confronted , after his walkabout, by the treacheries of his English familly. The culture shock can be imagined. From Cosmic and ultimate truth, he clashed with the lies of this village small mindedness of his familly politics. He killed his father, and like a romantic fugitive he fled to Fance. Anyone can see what happenned here.He was struck by a lie to his truth, fromn his father and his conciousness had exagerated, in our terms the horrors he faced.A culture shock/clash.
He wqasdetained at the Bethlam and took him 9 years to nearly complete his great work "The Fairy Fellers Masterstroke". He was enligfhtenned by this time. This self portrait clearly depicts this,and was fit for release. He must of sufferred greatly by this time, to have received thuis enlightenment, surely a great work. Yet at this point he was comitted to a further 20 years horrific detantion at Broadmoor asylum. Thss to me indicates the interplay of politics related to his painting.Just a short while prior to its completion, he was moved ionto higher security. He must have been considered dangerous. Perhaps on his abillity to shine a light on the achilles heel of the system? It still is today.Not many people have this sort of insight into Richard Dadd.But only from the inside of the system can he be fully understood.
He died eventually of tuberculosis. They showed him no mercy. Itr was only by accident that his picture came to light, 100 years later. They tried to cover it up. There is no doubt.
He shouldnt be looked at out of context. But little remains of the predicament of others interned with him, or throughout the British penal system,from these days. Very little evidence has survived. Yet again it would take someone from the inside of ths system to shine a light on it.One of the very few pieces of surviving documentation from the inside of the system, are Richard Dadds paintings. Very little indeed to go on. Most of the story will never be known.
His painting has numerous levels of understanding and secrte locked in messages,only an insisewr can unlock many of these meanings.

One wonders about the very many tragic unknown and forgotten stories go alongside this message from Richard Dadd.
If one requres further insight and research into Richard Dadd, ask some lifers from one of Her Majesties Prisons. Unlock some of the meanings of "The Fairy Fellers Masterstroke".

The big issue that acts as a punctuation mark or full stop to the Richard Dadd story, is what became of him after his famous masterpiece was painted. It began 10 years after comittal, and is proofd of his fulfilling the erquirements for release, yet 30nyears continued where he died in detaention. As the painting approached its finish, high security measures were implimented andhe was moved to Broadmoor,where he died 20 years later.Tuberculosis being common in the damp cold conditions.
His painting delivers the full circle of a circa and depicts an enlightenment of this path,yert no moves were made to improve his circumstances. His pa\inting was confiscated and notr rediscovered, by accident 100 years later.He should have been a free man by rights his vcase was highly politic, as was the inner workings of the goulags. I submit as they are today.
A clear case of Destroying the Evidence.

Perhaps furtrher to THe Fairy Fellers Masterstroke, their is a 4th, 5th, 6th, door of enlightennement we shall never know about.

The Home secretaries of the time did indeed kill Richard Dadd.Indirectly.
Collapse